Tree Aid Director of Operations Georges Bazongo is at COP26. Watch him deliver our message to the Parties of the UNFCCC.

COP26 – the world’s largest annual climate conference – has started this week. Hundreds of world leaders are gathering to accelerate international action in tackling the climate crisis.

COP stands for ‘Conference of Parties’, which is the decision-making body of an international convention. COP26 in particular refers to the 26th gathering of the States that are Parties to the United Nations Framework Convention on Climate Change (UNFCCC).

The UNFCCC’s COP26 will be hosted by the UK and Italy in Glasgow from 31st October -12th November 2021. It will bring all 197 member nations together to accelerate action towards the Paris Agreement goal of keeping global temperature rises below the 1.5°C limit. If this is achieved, the most dangerous impacts of the climate crisis can be curtailed.

Why is COP26 so important?

Tree Aid works towards the vision of thriving communities across the drylands of Africa, where trees sustain livelihoods and enrich the environment. The climate crisis is a significant challenge to the realisation of this goal.

The areas we work in across the Sahel are the most acutely hit by the climate crisis, while contributing to it the least. This means they are extremely vulnerable to climate shocks and lack the resources to adapt. Temperatures across the Sahel have risen by nearly 1°C in the last 30 years, almost twice the global average.

For rural communities in the drylands of Africa, climate impacts also mean erratic weather patterns with increased droughts and flash floods. These degrade ecosystems and jeopardise food sources. Because most rural populations depend on agriculture and ecosystems to survive, the cycle of poverty and hunger is worsened, making them even more vulnerable.

The next decade is critical for the survival of ecosystems and communities across the Sahel. Limiting dangerous climate change impacts and adapting to those we can’t, is one crucial step aspect towards that survival.

This is why COP26 is so important for the people Tree Aid work's with. It's an opportunity to elevate the issues that the communities we serve face. It's also a chance to advocate at the highest level of governance, for a wider deployment of solutions that work, such as nature-based solutions (NbS) like the Great Green Wall. 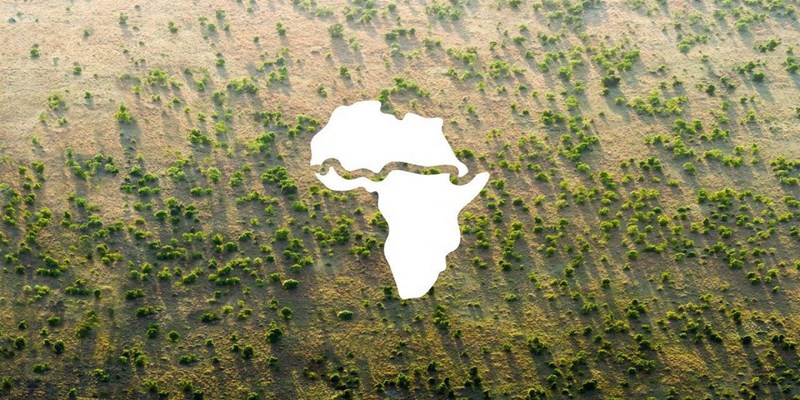 What do we want from global leaders at COP26?

COP26 is a chance for all member nations to review progress towards their climate goals, as well as set even more ambitious targets to tackle the climate crisis. At Tree Aid, we are using this opportunity to call on Parties to the UNFCCC to:

1. Recognise that restoring and protecting nature is crucial to reach the Paris Agreement goals. This means urgently integrating global action on biodiversity loss and climate change.

We believe that the triple crisis of climate change, biodiversity loss and poverty are inseparable; all three must be addressed together. Although COP25 recognised the critical role of nature in tackling climate change, it did not go far enough. We believe member nations must now define how to put this into practice. 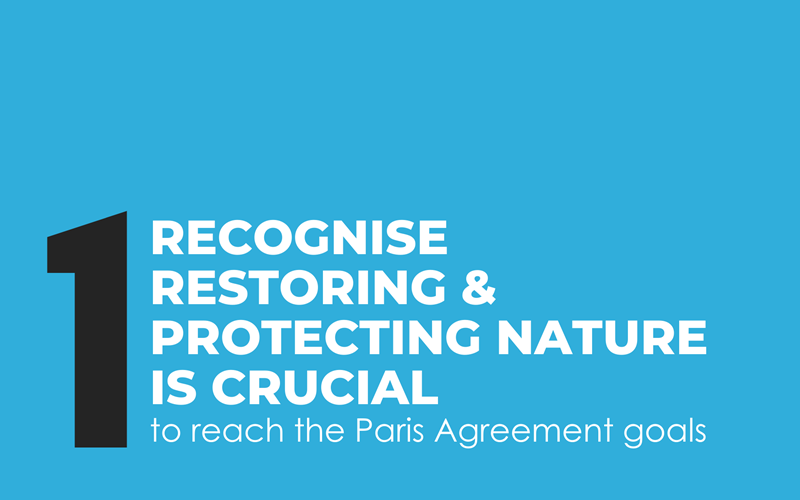 So far, the promise made by developed countries at COP21 to make $100bn/year climate finance available to developing countries by 2020 has fallen short. Only 25% of these funds are dedicated to climate adaptation. That’s why we are asking global leaders for more and better-quality climate finance, with 50% dedicated to climate adaptation. This will help the communities hardest hit by the climate crisis to prepare for what the future holds. 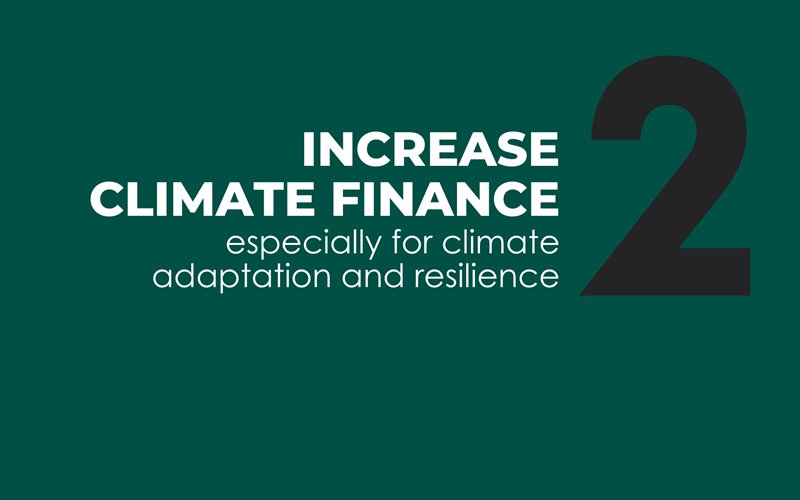 3. Recognise the African drylands as a priority area for international climate finance and action. 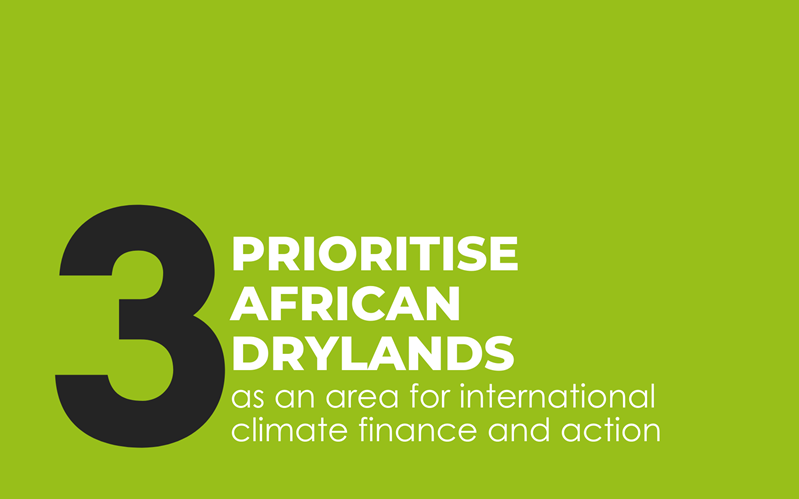 4. Scale-up funding for nature-based solutions in the drylands of Africa, especially the Great Green Wall.

We want global leaders to scale up funding for high-quality nature-based solutions (NbS), that provide integrated approaches to tackle the climate, biodiversity loss and poverty crises, like the Great Green Wall. This would build on momentum started this year at the G7, where the Nature Compact was published in June 2021. The Compact highlighted the Great Green Wall as an example initiative to “prevent the loss, fragmentation and degradation of ecosystems and to restore significant areas of degraded and converted ecosystems”. Earlier, in January 2021, the One Planet Summit also recognised the value of the Great Green Wall, announcing an Accelerator Fund of $14 billion. But more action is needed. We ask leaders at COP26 to follow this recognition and scale-up funding. 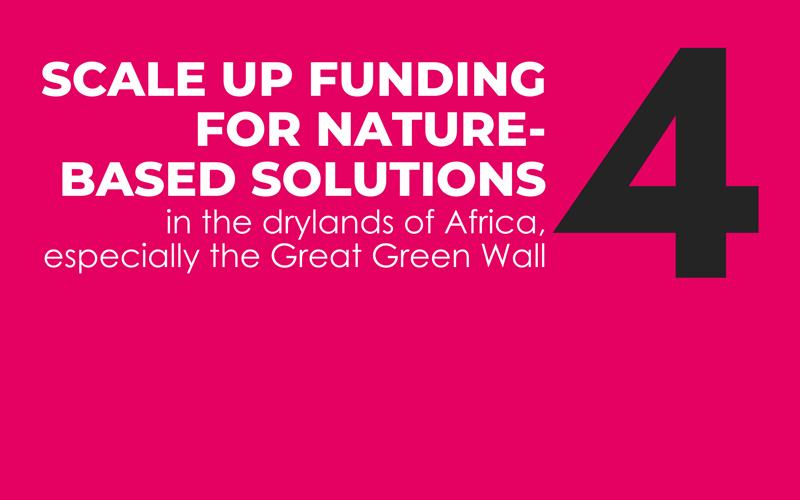 5. Revise the language used around trees and forests so that it reflects the needs of local ecosystems and communities.

Forests and trees are not the only answer to the climate crisis, but when promoted in the right way, provide a powerful part of the solution. They can help people to fight poverty and hunger, and build resilience to climate shocks. By protecting soil and agricultural land, they also help to store carbon in the ground. Many case studies, including in the drylands of Africa, have demonstrated this. But we believe the definition of forests used by the UNFCCC is problematic. It doesn’t distinguish between different types of landscapes, and regards biodiverse forests and monoculture plantations as equal. We are calling on leaders to revise the forest definition to reflect ecological realities as well as the views of forest-dependent peoples.  This will incentivise practices that boost biodiversity conservation and serve the interests of local populations. 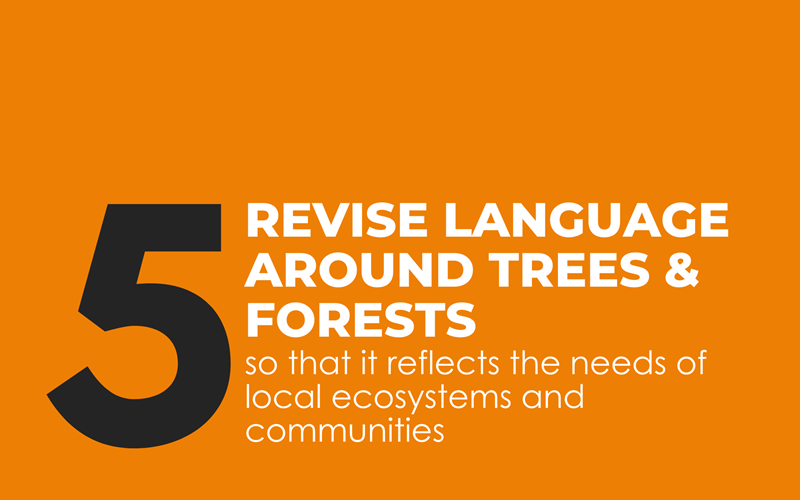 Can you help raise Tree Aid’s voice and make sure that Global Leaders hear our Call to Action? Help support ecosystems and local communities in the drylands of Africa in the fight against climate change and share this widely with your networks.
Tweet about this
Share
Facebook Twitter Linkedin Email
Tags
Natural resource management
Written by
Annie Schultz