An update from our She Grows project in Mali

Back in April 2019, we asked for your support to fund the She Grows project to work with 1,000 women in Mali to grow trees, food and incomes through sustainable businesses. Now, thanks to your generous donations and match funding from the UK government, that project is well underway.

In June 2021, just over half way into the She Grows project, Tree Aid welcomed a visit from the UK Embassy. The British Ambassador to Mali, Barry Lowen, attended his first in-country visit to an NGO programme and we were delighted that our project was chosen. Visiting a women’s cooperative in N’tijila village in the Koulikoro region of Mali, the Ambassador saw first-hand how the cooperative had benefited from the project.

For these women it was the first time they were able to secure access to their own land and tree resources. With support from the project, as well as planting 1,000 trees on their land, they had also set up beehives to produce honey to sell. During the visit, the Ambassador planted a tree and congratulated the women for their commitment to the project, tackling poverty and the effects of the climate crisis. 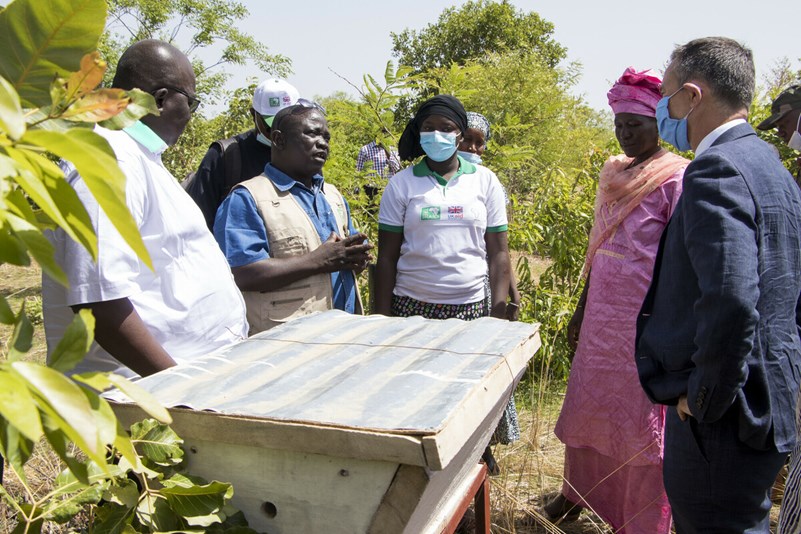 Image above: Tree Aid’s country manager, Amadou Tangara, and women from a community supported to set up a honey enterprise group through the She Grows project, discussing the benefits of the project with the UK Ambassador to Mali, Barry Lowen (right).

Progressing in the face of a global crisis

The project began in February 2020, around the time that Covid-19 was declared a pandemic. Although this delayed the start of the project, it allowed for a change of priorities in those first months. We adapted the introduction stage of the project to include essential information about the global health crisis, ensuring that we were keeping the people we work with as safe as possible.

Thankfully, cases of coronavirus have remained low in Mali and across West Africa. Since then, the project has been able to continue at pace and is making good progress towards achieving its goals.

Image above: Anna Diarra, a woman taking part in the She Grows project, wearing a face mask to help prevent the spread of Covid-19.

We supported each of the ten women’s cooperatives we are working with to gain legal registration as a group. This is essential for them to be able to secure access to forest resources – something that hasn’t always been easy for women in rural Mali. Sèkoura, a project participant on the She Grows project, told us that, “Women in this community had difficulty accessing agricultural land and land loans are unsecured.”

As well as a land charter being signed in each village – an agreement securing long-term access to land – 140 people also attended training sessions to learn more about what exactly land charters are and how they can secure them. Talking about the value of these sessions, Sèkoura said, “Thanks to this project, women are starting to gain access to land.”

Image above: Sèkoura Diarra (central), a woman taking part in the She Grows project, talking with women in her village’s cooperative group.

Facilitating the financial empowerment of women

We worked with 1,134 women in ten women’s cooperatives to establish 40 village tree enterprises – groups that process and sell tree products. All of the groups are now harvesting shea nuts to make products like shea butter as a source of income. Management representatives from each enterprise group received leadership training, covering key issues in their communities including gender inequalities – something deeply engrained in many rural societies in Mali.

Sèkoura told us that “The collective work of women facilitates the financial empowerment of women. Through cooperatives, women are able to access loans and have easy access to markets. The mentality of the community, and in men in particular, has changed with regards to the social status of women.”

As well as developing tree product enterprises, four women’s cooperatives also chose to focus on beekeeping. The project supplied them with equipment like beehives, gloves and suits, to support the groups to produce honey and beeswax to sell and earn an income all year round.

Managing resources for the future

The other six cooperatives chose to focus on implementing agroforestry activities on their land and some women from these cooperatives received training on how to manage their land and tree resources more sustainably. This included learning about soil and water conservation, assisted natural regeneration and seedling production techniques. They also received tools to help them put their new skills into practice, including wheelbarrows, shovels and seeds.

Before the project, many people in the communities told us that the production of plants was seen as a man's job. Now with the tools and training they have received, these women have sown over 5,000 tree seedlings, which are now starting to germinate. Female representation in natural resource management committees has also increased, following a restructure of each committee. Now 50 women have been empowered to take on strategic positions in their committees, such as supervisor and administrative secretary.

Image above: Sèkoura Diarra (central), demonstrating land management techniques to women in her cooperative that she learnt through the She Grows project.

How it fits into the bigger picture

Following the project visit, the UK Ambassador to Mali, Barry Lowen, told Tree Aid that he had learned a lot about the reality of the lives of the people we work with on the frontline of the climate crisis. He told us that he saw the project as a response of the British Government to poverty and the climate crisis - something which he felt is important as the UK gears up to host COP26 in Glasgow later this year.

Sèkoura also told us about how she hopes the project will help her family to cope in the face of a changing climate. “My family and I have learnt about strategies to build our resilience to climate change. Our family lives off agriculture and our crops are often affected by poor rainfall. The project helped us overcome these difficulties by teaching us adaptation strategies such as assisted natural regeneration, stone bunds and zai pits.”

Concluding his visit to the She Grows project, Her Majesty’s Ambassador to Mali, Barry Lowen said “I was delighted to see how Tree Aid, with our support, was empowering women to develop new and climate-resilient ways to provide for their families.” 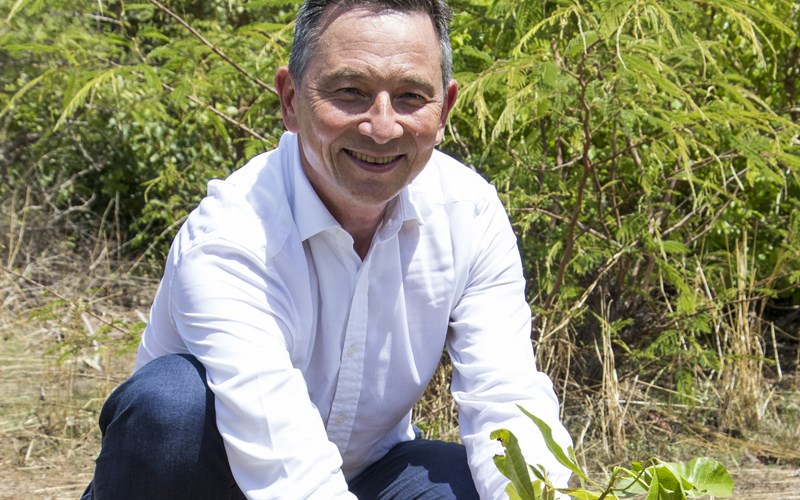 Image above: The UK Ambassador to Mali, Barry Lowen, planting a tree in N’tjilla village on his visit to Tree Aid’s She Grows project.