The Paris Climate Agreement has been hailed as a great step in international efforts to tackle the climate crisis. Now, 6 years since the agreement came into force. Tree Aid looks at how it works, and what is the future for this important treaty.

What is the Paris Climate Agreement?

The Paris Climate Agreement (also known as the Paris Accord) is an international treaty on the climate crisis aiming to radically reduce the world’s carbon emissions and prevent a catastrophic rise in the Earth’s temperature over 2°C. It was introduced to rally the world’s nations together against our common deadly threat – the climate crisis.

On 22nd April 2016 – also known as Earth Day – the Paris Agreement was signed by world leaders. The agreement holds the Earth’s nations legally accountable for their actions, or inaction, in tackling and adapting to the devastating effects of the climate crisis – something which Tree Aid works tirelessly to address. 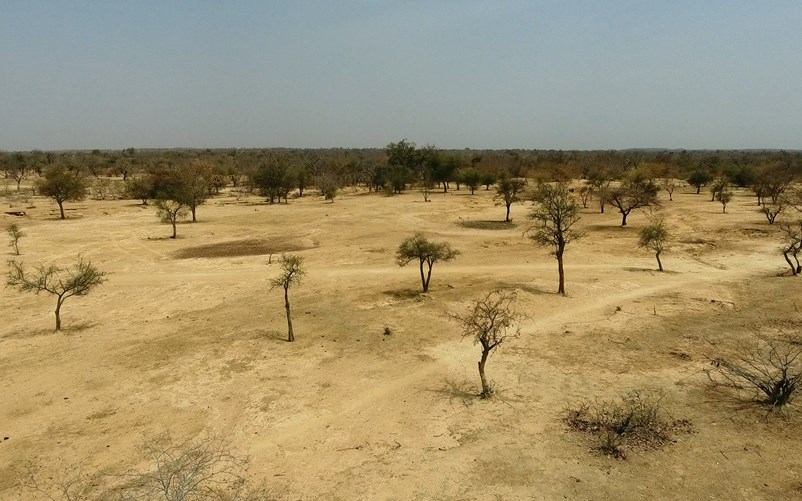 How does the Paris Climate Agreement work?

The Paris Climate Agreement aims to keep countries accountable and on-track for the 1.5–2.0°C target. All 189 participating countries must establish climate-specific goals to reduce their carbon footprint, known as Nationally Determined Contributions (NDCs). By allowing each country to set their own emission reduction targets and strategies, this landmark agreement is succeeding where past attempts failed.

The agreement ensures transparency by requiring all countries to openly report on their plans and progress, and review their NDCs every five years. Fully industrialised countries are also expected to lead the way in reducing greenhouse gas emissions, with the agreement acknowledging that developing countries are not economically equipped to operate at the same level. 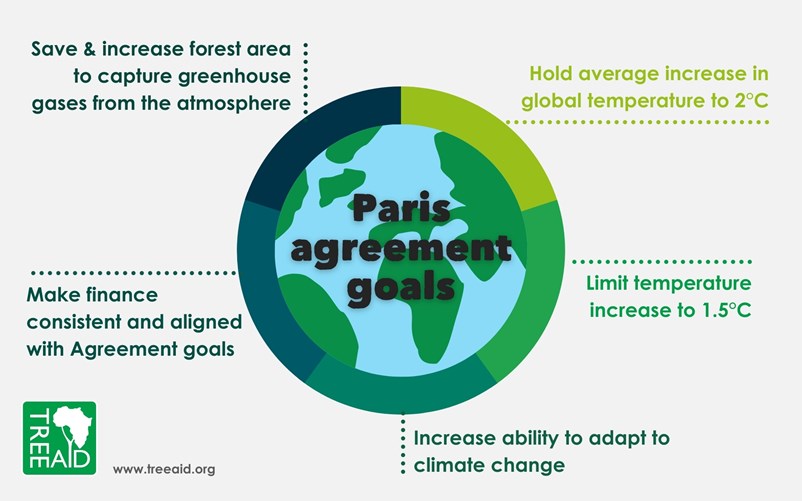 The short answer? Yes. As the UN describes it, the Paris Agreement is a ‘legal instrument’ through which countries are legally bound to set regular national targets, report on their progress and make adjustments in their commitments to tackling the climate crisis.

The misconception that the accord doesn’t hold participating nations legally accountable, is incorrect. While participating nations are not legally held to a single universal target, they must consistently set and review their own climate goals and plans every five years. As such, the Paris accord is “a hybrid of legally binding and nonbinding provisions”.

Will the Paris Climate Agreement work?

Since the 1990s, governments have debated the best way to tackle the climate crisis, and while most countries agree that the Paris Agreement has great potential, and progress has been made, many scientists and activist groups still fear action is too little and slow to stop a global temperature rise of over 1.5°C. But, despite the steps that have been taken to reduce greenhouse gas emissions around the globe, we are frighteningly close to surpassingly the 2°C temperature rise.

Over the last three decades, climate-related disasters like forest fires, flooding, and cyclones have tripled and as a result, around 20 million people are being displaced every year. With 2020 seeing a surge of climate-based disasters, including the devastating Australian wildfires and deadly heatwaves across India, Pakistan and Europe, it is clear that despite the Agreements accomplishments, this is no time to take the foot of the gas. 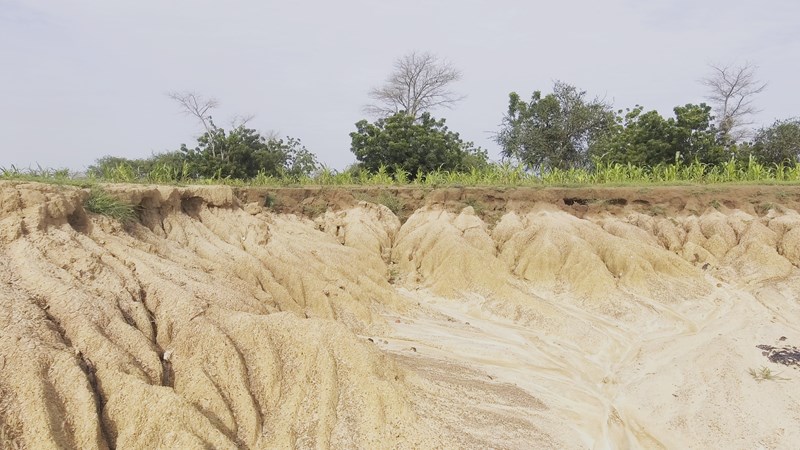 What is the future for the Paris Climate Agreement?

With the 26th UN Climate Change Conference of Parties (COP26) – a summit to bring parties together to accelerate action towards the goals of the Paris Agreement – scheduled to take place in Glasgow in November 2021, all eyes are now on the UK. The Bond Development and Environment Group, of which Tree Aid is member, see this meeting as a chance for the UK government to ‘lead by example’, showing that ‘by stopping the climate crisis, we can also restart our economy’ in a way that ‘can benefit everyone’.

Speaking at the Climate Ambition Summit 2020, COP26 President Alok Sharma expressed his optimism for the Paris Climate Agreement while clearly stating that more must be done. He said, “It is clear that the appetite to tackle this challenge remains, but we all must do more. Together, I know we can ensure the Paris Agreement delivers.”

How Tree Aid is contributing to Paris Agreement's goals

While so-called “natural” disasters have a global impact, the aftermath is not indiscriminate. The climate crisis disproportionally affects the world’s poorest and vulnerable who are unable to rebuild their lives after they have been violently disrupted by the consequences of the climate crisis. As a result, many people are subjected to a life of displacement and poverty.

At Tree Aid, we work with people that are amongst the most vulnerable to the effects of the climate crisis. We believe that you cannot create viable, long-term solutions to poverty without tackling the climate crisis at the same time. This triple-emergency of the climate crisis, environmental degradation and poverty, requires a holistic approach that address all of them together.

That’s why, at Tree Aid we work with people in the drylands of Africa to tackle poverty and the effects of the climate crisis by growing trees that provide nutritious food and incomes, and restoring and protecting land to look after the environment for the future. Every tree we grow or protect is part of something bigger. It is helping to challenge the effects of the climate crisis while tackling hunger and poverty. 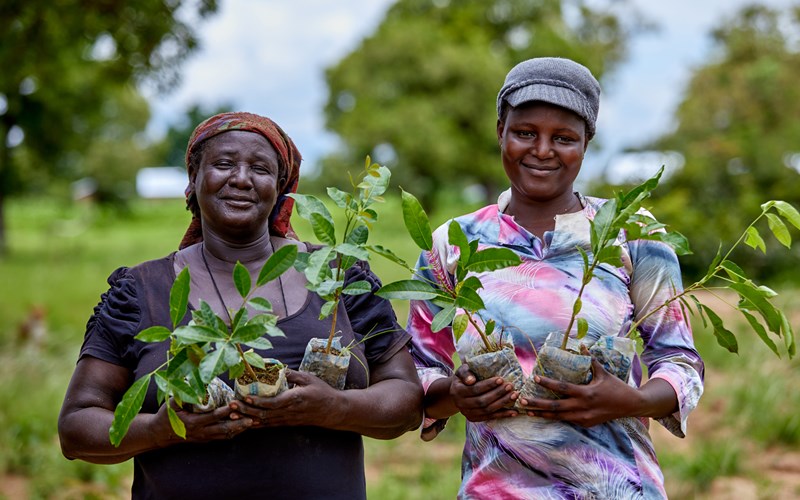 Working towards the Great Green Wall

As nations strive to meet commitments made under the Paris Climate Agreement, the Great Green Wall movement is a vital opportunity for African nations to accelerate their contributions towards their national targets. This African-led initiative envisages an 8,000km mosaic of restored land across the Sahel, where people live with the effects of the climate crisis every day. As land loses its fertility, people struggle to grow enough food and poverty is increasing.

We are proud to be working in partnership with the African Union and the UN Convention to Combat Desertification to make this ambitious project a reality and help transform the lives for people living along its path. All of our work supports the Great Green Wall movement, helping communities to tackle the climate crisis while adapting and building resilience to its devastating impacts by growing trees to provide nutritious food and green jobs for the millions of people living along its path. 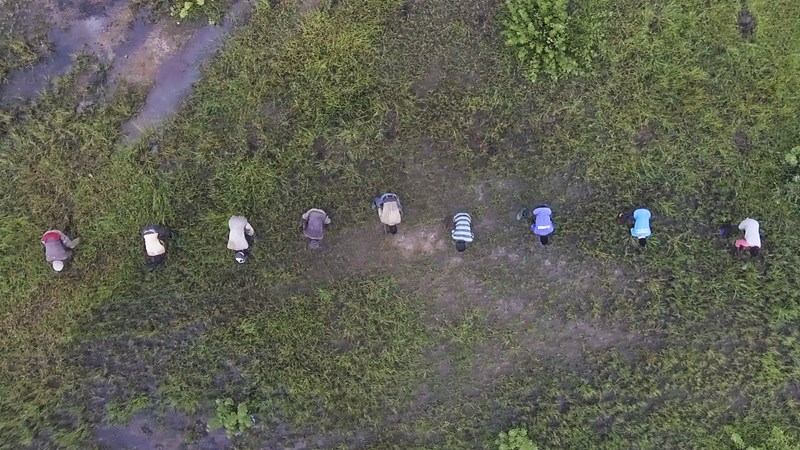