How one man stopped the desert

Yacouba Sawadogo is known across the world for regenerating land to stop the oncoming desert. In fact, his story was immortalised in the documentary ‘The Man Who Stopped the Desert’.

Born in Burkina Faso in 1946, Yacouba has experienced first-hand how the climate crisis has cause destruction of the land, turning it to desert. The rains became more and more irregular, resulting in Yacouba and others in his community having a lack of water to drink, for crops and use for cooking. The land became barren and infertile. It was becoming impossible for people to grow enough crops to feed themselves.

But all was not lost. Yacouba thought of a way to regenerate the land, making it green and able to sustain life once more. He is known across the world for his innovation. Yacouba is now involved in a Tree Aid project in Burkina Faso, helping others to regenerate their infertile land.

From dust to life

Zai is an ancient farming technique used in Burkina Faso. It involves digging pits in the soil, allowing water to flow in. While this technique had some success previously, Yacouba made it more and more successful. He began making the pits bigger and deeper than normal, as well as adding manure into the pit. This allowed more water to be stored, while also improving nutrients in the soil.

Yacouba also added stone bunding around the crops and planting pits. Previously, in the rainy season, the water would run off the soil without being absorbed and will cause soil erosion. By adding stone bunding, Yacouba trapped the water so that it slowly trickled through. This gives the soil time to absorb the water and to stop topsoil loss.

Yacouba’s innovation didn’t stop there. He also added termites to the planting pits. The termites began to aid Yacouba in his fight to restore the land. By breaking up the soil and providing more nutrients, the termites helped to improve the planting conditions for crops and trees.

This technique made him famous across the world and has helped regenerate vast areas of land.

Beating the odds to become a world leader

Yacouba encountered many obstacles, including people burning his crops in protest of his methods. But he persevered. And it is just as well that he did because his method was a huge success. His gamble paid off and he began to reap the rewards. He has now regenerated many hectares of land, making the soil fertile once again, meaning people are no longer going hungry.

Researchers come from across the globe to learn Yacouba’s methods of land and forest restoration. He is held in high regard across the scientific community, with researchers praising him for solving the problem of how to stop a desert. Because of Yacouba’s work on land restoration and conservation, and protecting biodiversity, in 2018 he won the Right Livelihood Award, the alternative Nobel prize in Stockholm, Sweden.

A champion of trees

After his success with soil techniques, Yacouba began adding trees to his land. In the beginning, there wasn’t a single tree. But as soon as he realised the vital role trees play in maintaining a healthy ecosystem, he took it upon himself to plant trees throughout his land.

“Trees have a very important role to play in nature, they make the rains fall and we can use them for other things as well. The most important role is as windbreaks, forests slow the winds and, if the winds can be stopped, then everything can develop marvellously. Without the forests, many animals and species will disappear.”

He now has a 12-hectare forest on his land as a result of his planting efforts. And his forest is rich in biodiversity and full of unique species. By planting trees, he is protecting wildlife and ensuring a better future for generations to come. 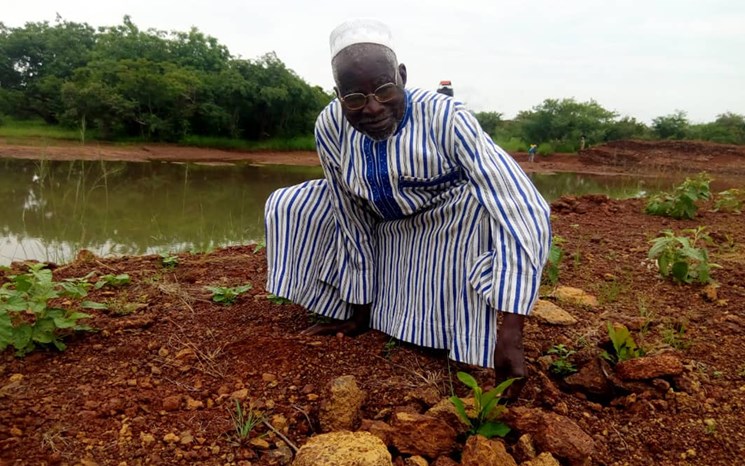 We are proud to be working with Yacouba on a Tree Aid project in Burkina Faso. We have provided tools and training so that communities can use trees for food and to earn an income from their fruits, nuts, seeds and leaves, including moringa and baobab. As the communities rely on the trees, they are protected for generations to come. This benefits the soil, biodiversity and the communities that surround them.

Yacouba is still committed to protecting the environment. With the help of Tree Aid, he is planting more trees and empowering others to use his techniques.

We have joined forces with Yacouba to create a forest management plan through this project. We have also supported him to create a local land ownership charter for his land to help him protect it. The project is also encouraging school children to visit his farm to learn more about the techniques.

Yacouba’s innovation has helped many farmers learn how to restore the land across the drylands of Africa, allowing them to grow themselves out of poverty and protect their environment.

“Trees have a very important role to play in nature, they make the rains fall and we can use them for other things as well. Without the forests, many animals and species will disappear.”
Yacouba Sawadogo
To join forces with more people like Yacouba in the drylands of Africa, please consider giving a regular donation.
Donate
Share
Facebook Twitter Linkedin Email
Tags
Natural resource management, Burkina Faso
Written by
Sally Airey